Ah, yes. You knew this day would come, didn’t you? Actually, I first made homemade butter well over a year ago, but I never got around to posting it on the blog. I was recently inspired to make butter again after Gabe and I flew back from Paris a few weeks ago. We spontaneously upgraded our tickets to business class (honeymoon, right?) and were blown away by the experience. I almost cried when I woke up a bit overheated from a nap and was instantly greeted by a flight attendant passing out cookies ‘n’ cream Häagen-Dazs.

There were so many lovely little touches that will make it very hard, alas, for me to continue the rest of my life as a BOTPP (“Back of the Plane Person,” according to my brother-in-law), but I was surprised that one of my favorite parts of the flight was the butter. Yes, you read that right. Since we flew Air France, we were treated to rich, creamy butter from Normandy that was flecked with tiny crystals of sea salt. I shamelessly spread it on my bread as thick as jam. And then I vowed to make some once we got home.

I don’t have cows from Normandy, but I was able to get a pint of organic heavy cream from the grocery store. And using my stand mixer (set to “super domestic”… I mean speed eight), within a few minutes I had about a half pound of soft, rich, homemade butter. I added extra flakes of sea salt to give it that French flair, bien sûr, and you should too! 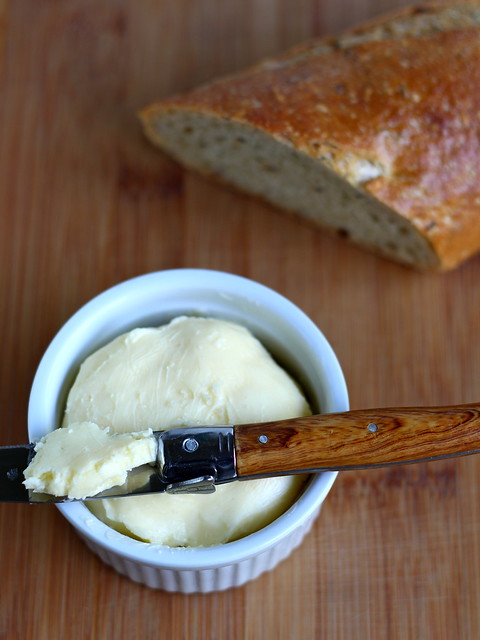 Pour the cream and 1/4 tsp. salt into the bowl of a stand mixer fitted with the paddle attachment.* Then cover the entire mixer with a dish towel. I can’t stress this enough: unless you want a kitchen splattered with cream, cover up that mixer.

Turn the mixer to medium high. The mixer will first turn the cream into whipped cream, then it will start to separate. You’ll hear a lot of loud splashing when the solids have separated from the liquids. When you see large chunks of butter have formed and are starting to stick to the paddle, the butter is done. Stop the mixer and use a colander or mesh strainer to drain the liquid into a small bowl. (Congratulations: you have just made buttermilk! Use it for biscuits or pancakes or something.)

Squeeze the butter with your hands and rinse it under cold running water until the liquids run clear. Squeeze as much water as possible from the butter, then taste it and knead in more salt if desired. Form the butter into a ball or sticks and refrigerate. The butter will keep for about a month in the refrigerator, longer in the freezer.

* I’ve also read that you can use a food processor instead of a stand mixer. I’ve never tried this myself, so please let me know if you try it and it works!